Pankaja Munde at Bhagwangad: The Minister for Rural Development and Child Welfare, Maharashtra Pankaja Munde said “I’m being targeted” in a speech on Tuesday. She added that she was constantly being questioned by her opponents on charges of corruption etc. While she did not clearly tell who her opponents were; the opponent party or the opponents in her own party, the BJP.

Although the arrangements for her rally had already been done at a religious place in Bhagwangad. The spiritual head Namdevashastri apparently announced that he won’t let Pankaja use a sacred place as a political battleground. Pankaja was adamant at holding a rally at Bhagwangad as she didn’t believe the situation to be as portrayed by her estarnged cousin Dhananjay Munde.

Pankaja finally decided to address the rally at the foothills of Bhagwangad, a km away from the decided venue after having darshan at the holy place.

Gopinath Munde had set a tradition of holding the Dussehera rally at Bhagwangad and Pankaja had been abiding by it since years.

The BJP leader, Pankaja finally addressed the enormous rally at the foothills of Bhagwangad where her supporters had already gathered in thousands.

In her speech, Pankaja targeted her rivals. She said that she has long been targeted by her rivals and allegations of corruption have been imposed on her by them. She added that they have called her “goon” while saying that she had threatened them. The minister said that she was being grilled like “Abhimanyu in Mahabharat“. She also said that the moment her people lose faith in her work she will submit her resignation and will not be there in the Cabinet.

While Cabinet minister Mahadev Jankar said that whether BJP backs Pankaja or not, he will continue supporting her strongly. He also took a dig at Pankaja’s cousin Dhananjay Munde, who he said had taken “supari” from Sharad Pawar and Ajit Pawar for Pankaja. 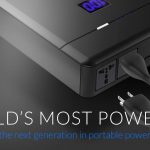 PLUG 48,000 mAh Power Bank Claims To Be The World’s Most Powerful Battery Pack
Next Article