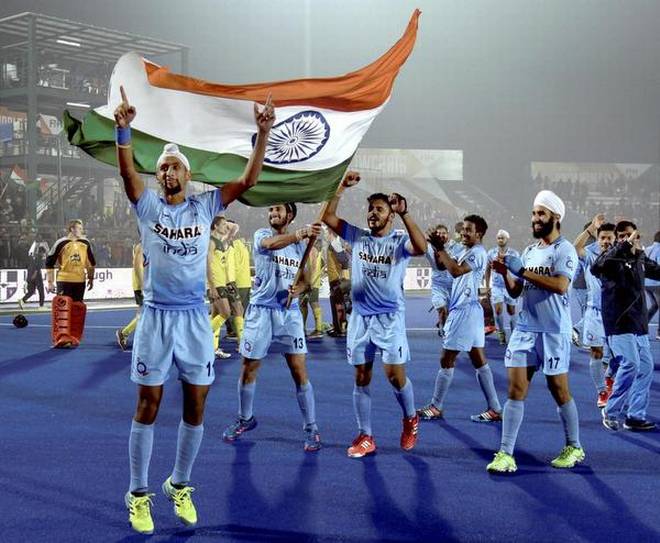 The fans witnessed a battle of epic proportions between the host nation and Australia.

Australian, Tom Craig drew the first blood scoring in the first half of the game. It was India’s Gurjant Singh scoring a stunning run and backhand flip, equaling the game in the 48th minute. Mandeep Singh’s superb steal and shot put the hosts into a 2-1 lead. Lachlan Sharp made it 2-2 in the 57th minute, which proved to be the final goal of the game.

The game went into a shootout which decided the outcome. India’s goalkeeper Vikas Dahiya was at center stage and at his best when de denied Australia’s Matthew Bird and Lachlan Sharp to score.

The Indians were spot on in the shoot-out,with Harjeet Singh, Harmanpreet Singh, Sumit and Manpreet Jr. finding the back of the net past the Australian goal- keeper.

India’s head coach Harendra Singh had told his players that it is now in their hands to decide the colour of the medal in what is seen as the “biggest game” of their career.

“December 18 match is the biggest game for these boys. I would fold my hands and request them to show their character on that day. They need to decide which colour medal they want to see hanging in their necks,” Harendra said after the semifinal win over Australia in a tough shootout yesterday.

Indian men’s senior team chief coach Roelant Oltmans, who is the manager of the junior side here and is also an integral part of the coaching set-up, called on the Harjeet Singh-led side to show their “perfect” hockey.

“Now it’s time for the perfect game and that we are going to show on Sunday. Our players will bring their best hockey in the most important match of the competition,” Oltmans said.

The Indian team is all ready to face Belgium as they are the only side against whom the Indian colts had lost 2-4 in the four-nation tournament in Valencia, leading up to the ongoing tournament.

Belgium stunned the six-time champions and title holders Germany 4-3 in the shoot out to advance to their maiden final of the Men’s Junior Hockey World Cup reaching the Semi-Final last time around.