Badrinath Ki Dulhania Poster: With a strategical promotional move ahead of the official trailer launch of Varun Dhawan and Alia Bhatt starring ‘Badrinath Ki Dulhania,’ earlier the team has launched the first teaser poster followed by the Varun Dhawan starring teaser video. Now, as the trailer launch date is just inches close, the team has released another poster featuring the leads.

The film is a part of the Humpty Sharma Ki Dulhania franchise. We saw a rather funny teaser featuring Varun as Badrinath yesterday. The new poster has the duo looking all exciting in a colourful avatar. The trailer of the film is all set to release this Thursday.This is the third time Alia and Varun will be seen romancing each other after ‘Student of the Year’ and ‘Humpty Sharma Ki Dulhania.’

With eyes on to the success of the movie, the lead cast i.e Alia Bhatt and Varun Dhawan have kickstarted the promotions of their upcoming film Badrinath Ki Dulhania. The film’s first teaser introducing Varun’s character of Badrinath Bansal released yesterday and people are loving it.

What to expect from the Badrinath ki Dulhania team in upcoming days?

A new teaser featuring Dulhania Alia would be out anytime soon. But before that, the makers of the movie have released the second poster of the movie which is quirky, colourful and full-on desi. 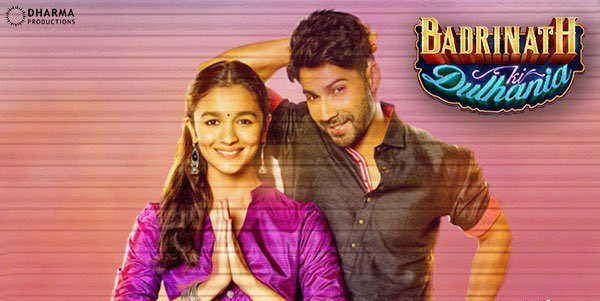 While Alia looks gorgeous in a traditional lehenga-choli paired with jhumkas and a kangan, Varun flaunts his desi swag in a red kurta and a Nehru jacket. The duo looks adorable on the poster which announces the shubh mahurat for the trailer launch.

Badrinath ki Dulhania is directed by Shashank Khaitan and produced by Karan Johar. Also talking about the trailer launch, the first trailer of Badrinath Ki Dulhania releases on February 2, 2017. The movie hits the theatres on March 10, 2017.