India vs England 5th Test Day 5: The final day sees many of the ups and downs but what bring India back in the game is Ravinder Jadeja, whose 7 wickets haul lead to India’s victory in the fifth ad final test against England. The hosts have whitewashed the England with the 4-0 victory in the 5-Test match series. India beats the England in the final test with an innings and 75 Runs. 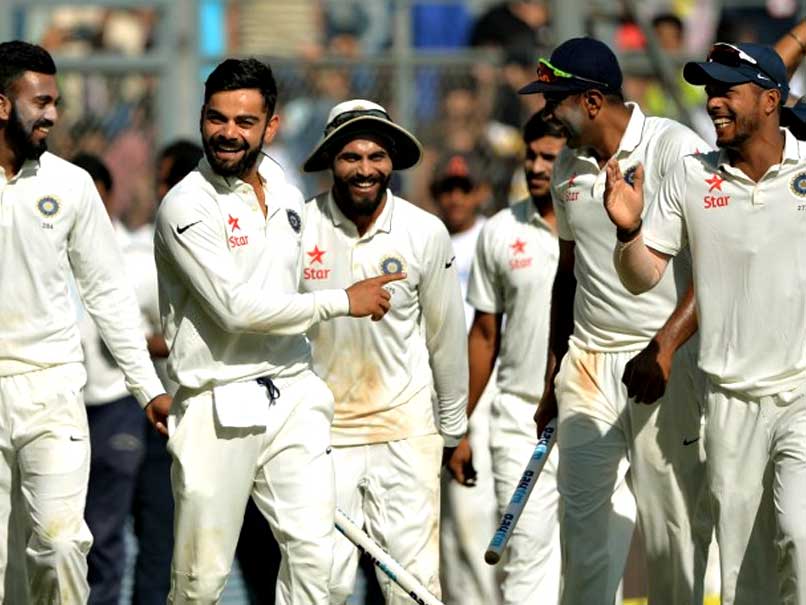 Summary of the day 5 game of India vs England 5th Test:

With Karun Nair’s unbeaten 303* runs contribution, Indian team succeeds in scoring its top score ever in the Indian Cricket history. India declared its innings at 759 with still wickets in hand. With the 5 overs remaining, England succeeds in not losing any wicket on day 4 and went back for no loss on the end of the game on day 4.

Chasing a score or if I say in an effort to draw the test, England started really well on day 5 and was carefully taking the steps forward until the second session of the game. In the first session, Captain Cook and Jenning were doing fine and didn’t lose their wickets. And then critics started questioning Kohli’s decision for taking too long in declaring the innings and that could lead the match towards the draw.

Indians came strong in the second session of Day 5.

But Indians comes on the ground in the second session of day 5 with some other intention and were eager to convert the match from a draw to the victory. And the Jadeja’s thunderstorm was still to arrive and when it came, it took away all the England batsmen with its blow. 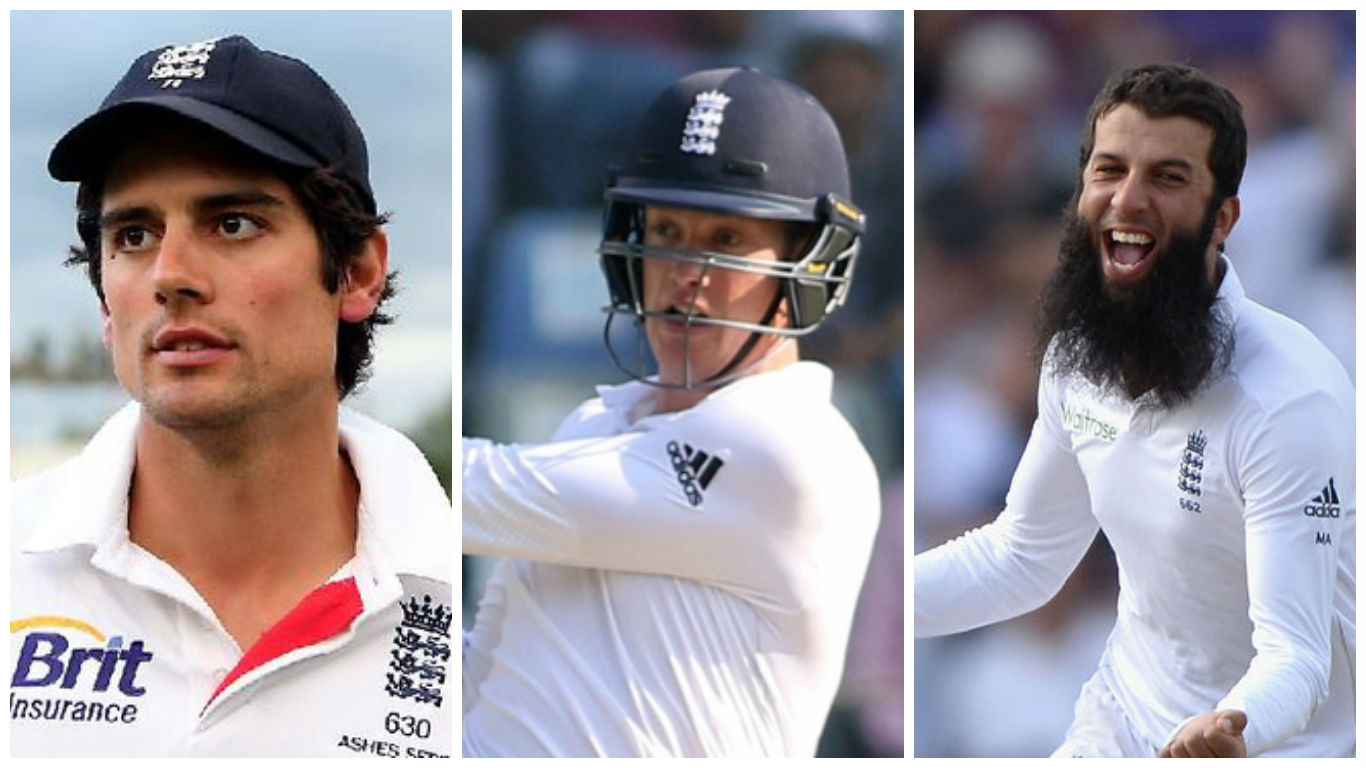 Jadeja claimed Cook for the seventh time in this series at the score of 49 and that is all that Indians were looking for, A major breakthrough. After this, the sequence of falling wickets started. Kohli’s aggressive captaincy also comes into the play and he started providing bowlers with attacking field set.

Then Jennings also becomes the victim of Jadeja’s turning ball and lost his wicket. Then none else stayed on the crease for any long except Moeen Ali who scored 44. It was not the wicket that was helping the bowlers, but it was the English batsmen who played irresponsibly and given away their wickets. And in the last two sessions, England lost all its wickets for the score of 207 and lost by an innings and 75 runs to India in the final test.

Scorecard of the England’s batting in the Second innings of India vs England 5th Test: 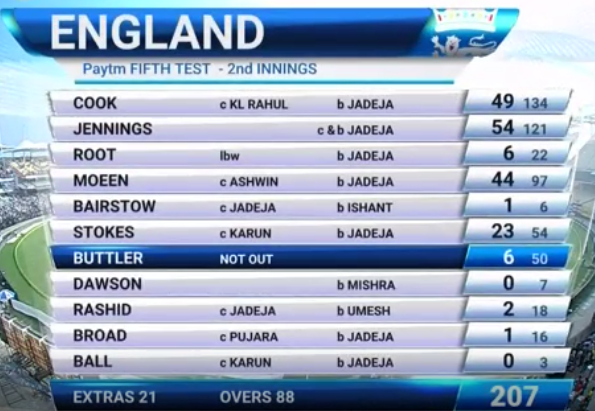 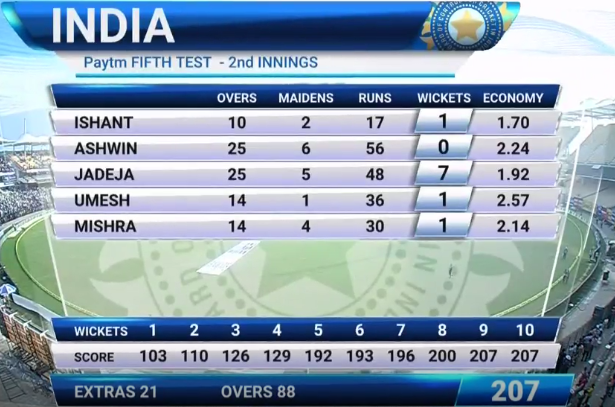 India’s batting scorecard in the India vs England 5th Test: 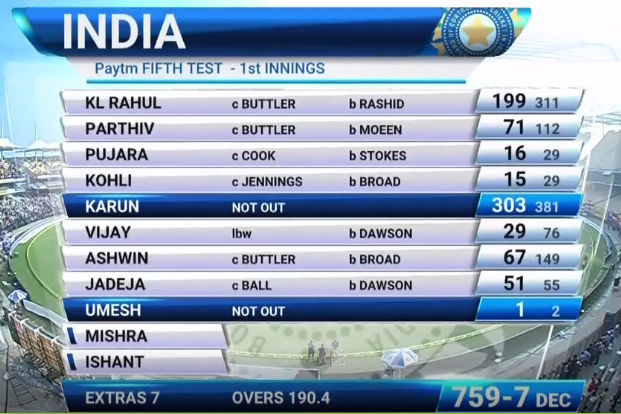 England tried all of its best to save the final test match so that it can go next with a positive attitude but it didn’t work out. So there moral could be down ahead of the upcoming ODI series and Indians will move ahead with some high on their moral and confidence. After a super-exciting Test match series, the ODI series is also expected to be super exciting.

What did both the teams lose and gain in this super exciting series?

However, what England had lost in this test match series is that their batting depth didn’t work for them and they failed to bear the pressure of Indian bowlers. So they will look forward to work on their batting order and take the moral of their batsmen up.

What Indias have gained is that they win with the great team effort. As per conditions and requirements, both seamers and spinners played their roles with their best efforts and also the team despite many new faces did well and didn’t look dependent on any one player but all the players played their roles really well. Some of the names are Murali Vijay, KL Rahul, Cheteshwar Pujara, Karun Nair and Jayant Yadav.