Las Vegas flooding due to monsoon rain poured causing floods in some of the city’s iconic casinos for the second time in two weeks.

Videos shared on social media showed water entering Caesars Palace and Planet Hollywood on the Strip amid a thunderstorm that swept into the area from the north around 8 p.m. local time. On July 28, the city had been deluged by another storm that unleashed damaging winds and sent water rushing into casinos.

You’re not going to believe this, but I’m not sure if it’s raining more inside @PHVegas or outside. @VitalVegas @LasVegasLocally pic.twitter.com/7LOI1kkcb1

Monsoon In Las Vegas Is The Wettest In 10 Years

This monsoon season in Las Vegas is the wettest in 10 years, according to the National Weather Service in Las Vegas.

A total of .58 inches of rain fell on the city Thursday, bringing the total rainfall of monsoon season so far to 1.28 inches.

Climate change, driven by all the greenhouse gasses that humans have released into the atmosphere, is changing the planet’s water cycle. This has been the phenomenon behind Las Vegas flooding.

Futher, rising temperatures are increasing water evaporation and changing the atmospheric and ocean currents that distribute moisture across the globe. In some places, drought is becoming more common, extreme, or prolonged. In others, heavy rainfall and flooding are increasing.

Shortly after 9 p.m., the Weather Service issued a flood advisory for all of Clark County, where Las Vegas is located, cautioning that high water could affect low-lying and poor drainage areas. Wind gusts of up to 64 mph were clocked at the North Las Vegas Airport and near the Strip, while the Weather Service received “multiple reports” of lightning setting trees on fire. 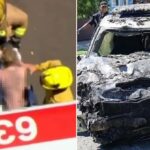 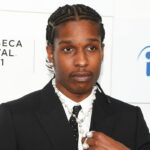