Prime Minister Narendra Modi is known for as a serious personality but this time he had been seen first time as a cameraman when he reached Nandan Van Jungle Safari in Chhattisgarh on Tuesday. He could not stop himself to take candid shots. He had been capturing a nature and its creatures, people who were present at that moment capturing PM Modi in their camera. 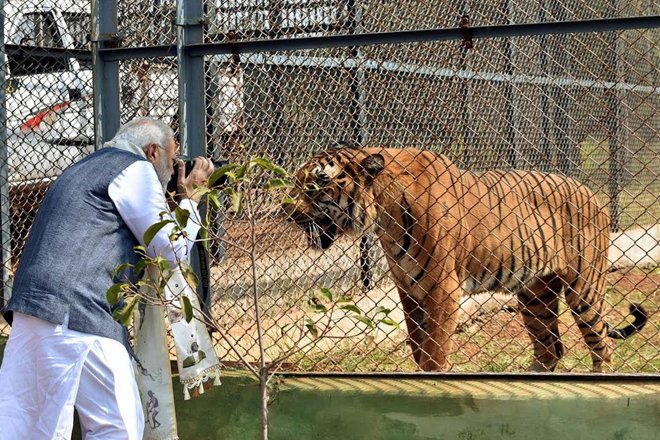 PM Modi capturing a picture of Tiger has got viral on social media, and people cannot stop comparing the PM Modi and Tiger. He was seen squinting into the camera and leaning close for a shot, with a tiger staring into the lens. PM Modi had been invited by the Chief Minister Raman Singh, who has been promoting Naya Raipur as a new hub for investment and projects.

“I see great scope for tourism in Chhattisgarh,” PM Modi tweeted later.
“On a day like this, we remember the work of our beloved Atal (Behari Vajpayee) Ji. He was the one who made Chhattisgarh,” he wrote.

PM Modi is in Chhattisgarh’s Naya Raipur as the state celebrated its 16th foundation day.  Naya Raipur is the upcoming new capital of Chattisgarh. It also holds the honour of being the first new city of the 21st century and is being built as a planned city along the line of Jamshedpur, Gandhinagar, Bhubneshwar, Chandigarh and Navi Mumbai.

The development of Naya Raipur as a smart city was envisioned in the Naya Raipur development Plan 201, which was sanctioned in 2008. It is divided into 40 sectors out of 21 are residential sectors.