The coffin of Queen Elizabeth II has arrived at Buckingham Palace in London after the 96-year-old monarch’s death in her beloved Scotland last week.

King Charles III has been pictured up taking his new state duties at Buckingham Palace for the first time.

The military C-17 Globemaster carrying the monarch’s casket touched down at RAF Northolt, an air force base west of the city, about an hour after it left Edinburgh on Tuesday.

U.K. Prime Minister Liz Truss, Defense Secretary Ben Wallace and a military honor guard were among those greeting the coffin before it was loaded into a hearse. Motorists pulled over and stopped in a show of respect as the illuminated hearse traveled under police escort on a London highway.

What Does The Photo of King Charles Shows

The picture shows King Charles at work inside the palace, going through documents from the red box, the locked box that contains important paperwork and briefing papers for Britain’s monarch.

The red box travels to the monarch wherever they are in residence.

The new photo of Charles was taken last week, prior to the Sept. 19, state funeral for Charles’s mother, Queen Elizabeth II, who died earlier this month at the age of 96.

Queen Elizabeth Was Regularly Pictured With The Red Box

During her own reign, Queen Elizabeth II was also regularly pictured with her official red box, which each monarch receives from their private secretary.

The image was taken in the Eighteenth Century Room at Buckingham Palace three days after Elizabeth died. 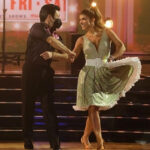 ‘Dancing with the Stars’ Recap: Elvis Night Brings a Kiss, a Flirtation and a Shocking Elimination
Leave a comment Leave a comment