Drake is one of the most popular rappers in the world. Drake’s net worth is estimated to be about $250 million in 2022. He is ranked #8 on our list of the Top Ten Richest Rappers in the World. Drake is rightfully regarded as one of the rap world’s rulers.

Aubrey Drake Graham was born in Toronto, Canada, on October 24, 1986. Dennis Graham, his father, is African American drummer who performed with Jerry Lee Lewis during his career. Sandra “Sandi” Graham, a Jewish Canadian who worked as an English teacher and florist, is Drake’s mother. When Drake was five years old, his parents got divorced, and he moved in with his mother in Toronto.

Later, his father relocated to Memphis, where he was finally detained and spent several years in prison on drug-related charges. Drake had a formal Bar Mitzvah celebration and attended a Jewish day school. Drake finally dropped out of school because he was frequently teased at school for his ethnic and religious heritage. Up until the sixth grade, he resided on Weston Road in the city’s working-class west end. In 2000, he relocated to Forest Hill, one of the wealthy districts. Drake studied at Forest Hill Collegiate Institute, where he showed talent in the performing arts and discovered a love for singing and acting.

Drake is not currently married and is single. He does, however, have a lovely son with his ex-girlfriend Sophie Brussaux. Drake and Sophie are not romantically involved, but they share parenting of their child.

Drake met an acting agent whose kid had gone to the same high school as him when he was 15 years old. Drake was hired for the teen drama series Degrassi: Next Generation as a result of the agent’s proposal. Drake portrayed a basketball star who was shot by a classmate and sustained a crippling injury. Drake sees Jay-Z as being an inspiration to him because of his long-standing passion for music. His debut mixtape was released in 2006, and the second and third ones followed one year later.

Drake and Lil Wayne have worked together on several songs, and Drake has taken part in one of Wayne’s tours. Young Money Entertainment negotiated a recording deal with Drake, who then put out his “Thank Me Later” debut studio album in 2010 to great success. Since then, Drake has worked on successful projects with artists from the underground to the mainstream. He has worked with some of the top musicians, such as Chris Brown, DJ Khaled, Eminem, Nicki Minaj, and Rihanna, among others. Since then, Aubrey Graham “Drake” has built an unrivaled career in the music business.

Drake is a wealthiest rapper and he has net worth of $250 million. The world is quite familiar with Drake, and everyone enjoys his profession. He is a rapper who is among the most well-known ones right now. He has participated in several shows and motion pictures, which has increased his success. 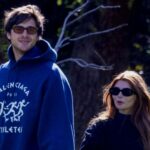 Olivia Jade And Jacob Elordi Ended Their Relationship
Next Article