Daniel Kaluuya is not making the trip back to Wakanda. The Oscar winner will not be appearing in Black Panther: Wakanda Forever, the highly anticipated sequel to Marvel’s Black Panther, due to scheduling conflicts with Jordan Peele’s Nope.

Contents
The First Appearance Of The Show Breaking news: Fresh from my NOPE Interview

This trailer for Discovery Plus’ new Armie Hammer doc is getting very dark real quick.

The news that Kaluuya would not be returning for the sequel began circulating online Wednesday afternoon, first reported by Rotten Tomatoes awards editor Jacqueline Coley.

The First Appearance Of The Show

In a first look at the show arriving Friday, September 2 on the streamer, the trailer previews the chronicling of deeply troubling accusations leveled against the actor and the twisted nature behind the Hammer dynasty’s legacy. The show features exclusive access as it examines shocking allegations over the course of three hours.

The interview had been with Daniel Kaluuya he did not reprise his role in #BlackPanther2 due to his schedule conflicts w/ #NOPE! tweeted Cooley. “It’s official he’s not in #BlackPantherWakandaForever.” A source with knowledge of the production confirmed to Vanity Fair that Kaluuya will not be appearing in the sequel.

Kaluuya portrayed W’Kabi—T’Challa’s best friend and head of security for the Border Tribe, which served as Wakanda’s first line of defense—in 2018’s Black Panther. He appeared in the film alongside Lupita Nyong’o, Danai Gurira, Letitia Wright, Winston Duke, and the late Chadwick Boseman, who starred as T’Challa. The sequel is rumored to see Wright’s character, Shuri, step into the titular role of the heroic Black Panther. In August of last year, Wright fractured. 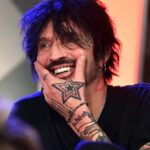