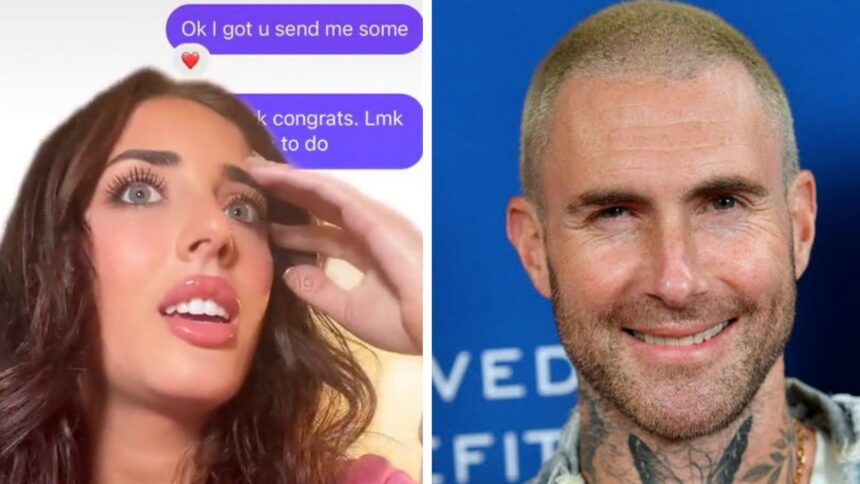 An Instagram model recently claimed that she had a fling with 43-year-old singer Adam Levine, declaring that the “Beautiful Mistakes” singer wanted to name his third child after her.

Sumner Stroh, a 23-year-old social media influencer, uploaded a TikTok video on Monday, September 20, sharing a screenshot of the conversations she allegedly had with the Maroon 5 vocalist.

The caption of her video read:

“Embarrassed I was involved w [sic] a man with this utter lack of remorse and respect.”

A model has gone public, claiming she had a lengthy affair with Adam Levine, airing alleged DMs from the married Maroon 5 singer.

Direct link to the video : https://www.tiktok.com/t/ZTRaAy3sh/

Sumner Stroh Says She Was Manipulated By Adam Levine

The Instagram model’s allegations come just days after Levine’s wife Prinsloo confirmed the couple were expecting their third child. Levine, 43, and the 34-year-old Namibian model have been married since 2014.

She says of the alleged affair: “I was young, I was naive. And I mean, quite frankly, I feel exploited. I wasn’t in the scene like I am now. So I was definitely very easily manipulated.”

Adam Levine has not yet publicly responded to the allegations. He and wife Prinsloo are parents to daughters Dusty Rose, 5 and Gio Grace, 4, with the African-born beauty speaking in recent years about their desire to have a large family. Did Adam Levine Cheat On Wife Behati Prinsloo? Let’s read on that!

After about a year of seeing him, Stroh stopped talking to Levine. But on June 1, the singer came “back into [her] life” by messaging her on Instagram again, she alleges.

She shared alleged messages from the music star that read: “It is unreal how f***ing hot you are. Like it blows my mind. You are 50 times hotter in person.”